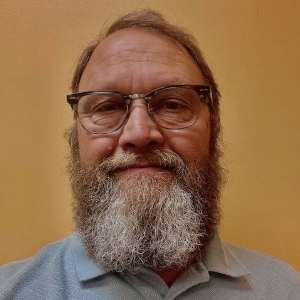 Dick Russell grew up in Canisteo, NY, an idyllic little community nestled in a scenic valley, drinking Pepsi  from tall glass bottles while reading “The Archies” comic books, both purchased at Tony’s Corner Store, playing various sandlot sports, making sure to get home when the street lights came on. He married a Canisteo girl, Kathryn Wheeler, in 1982, and they soon began their family, which now consists of their daughter, Kelly, her boys Max and Hudson, and their son Joel, his wife Andrea, and kids, Clara and Malcolm. Dick and Kathy still reside in Canisteo. He has been in the Human Service field for over 30 years, working with individuals with intellectual disabilities, counseling youth in the juvenile justice system, now serving as the executive director of Faith in Action Steuben County, a volunteer caregiving program assisting the elderly, since 2003. While being raised to attend church, it remained a nominal and occasional exercise until Christ opened Dick’s eyes to his death-producing sin, and his dire need of a Savior in the mid-1990’s. The true life Christ promised in exchange for that sin was realized as Dick repented and was saved, becoming a new creation, all glory to God. He has since served in various capacities in Christ’s church, culminating in ordination to the role of pastor/elder at Grace Baptist Church.