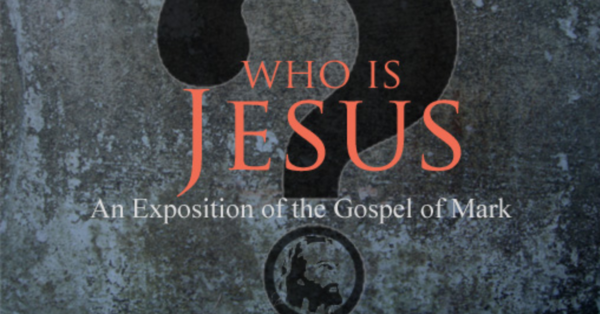 Every generation, and every individual is confronted with the pressing question: Who is Jesus?  The question of Jesus' identity is both important and unavoidable since the answer has eternal consequences.  There is no shortage of possible answers.  In Jesus' day, many people believed him to be a prophet, even a re-incarnation of John the Baptist.  In our day, it is fashionable to believe that Jesus is an example, a good moral teacher, an iconoclast, or a social reformer.

However, all of these - on their own and together - fall short of the correct answer.  Mark wrote his Gospel so that we would know beyond a shadow of a doubt who this Jesus is.  In short, he is the Christ, the Son of the Living God.  Consequently, Jesus is the One who has authority over disease, the demons, and even death.

Mark writes so that each of us, personally, would answer the question "Who is Jesus?"  Ultimately, it doesn't matter what other people say about Jesus; rather, "Who do you say that I am?"

The Gospel of Mark is written to those who would recognize that Jesus is the Christ, and that they would follow him with their whole lives.  Thus, the latter half of the book has much to say to us about what discipleship looks like in the lives of all who follow in the footsteps of Jesus.  We trust that as you listen to this series, you would come to believe that Jesus is the Christ, the Son of the Living God, and that you would begin to follow him.

Who is Jesus? An Exposition of the Gospel of Mark was preached from the Grace Baptist Pulpit between January 2011 and September 2012.

The Beginning and Ending of Mark

The Resurrection of Jesus

The Burial of Jesus

The Death of Jesus

Laughter at the Foot of the Cross

The Weakness of the Flesh

Passover and the Lord's Supper

The Plot to Kill Jesus

Signs of the End of an Age, Part 3

Signs of the End of an Age, Part 2

Signs of the End of an Age, Part 1

The Parable of the Tenants

Showdown With The Sanhedrin

Lessons from the Fig Tree

A Tale of Two Sons

Jesus and the Children

Who is the Greatest?

The Destiny of Disciples

The Destiny of Jesus

The Leaven of the Pharisees

He Has Done All Things Well

The Death of John the Baptist

Jesus Sends Out the Twelve

A Prophet Without Honor

Lord of the Storm

The Parable of the Sower

Lord of the Sabbath

To Fast or Not to Fast

Profile of a Christ-Follower

The Baptism and Temptation of Jesus

The Ministry of John the Baptist