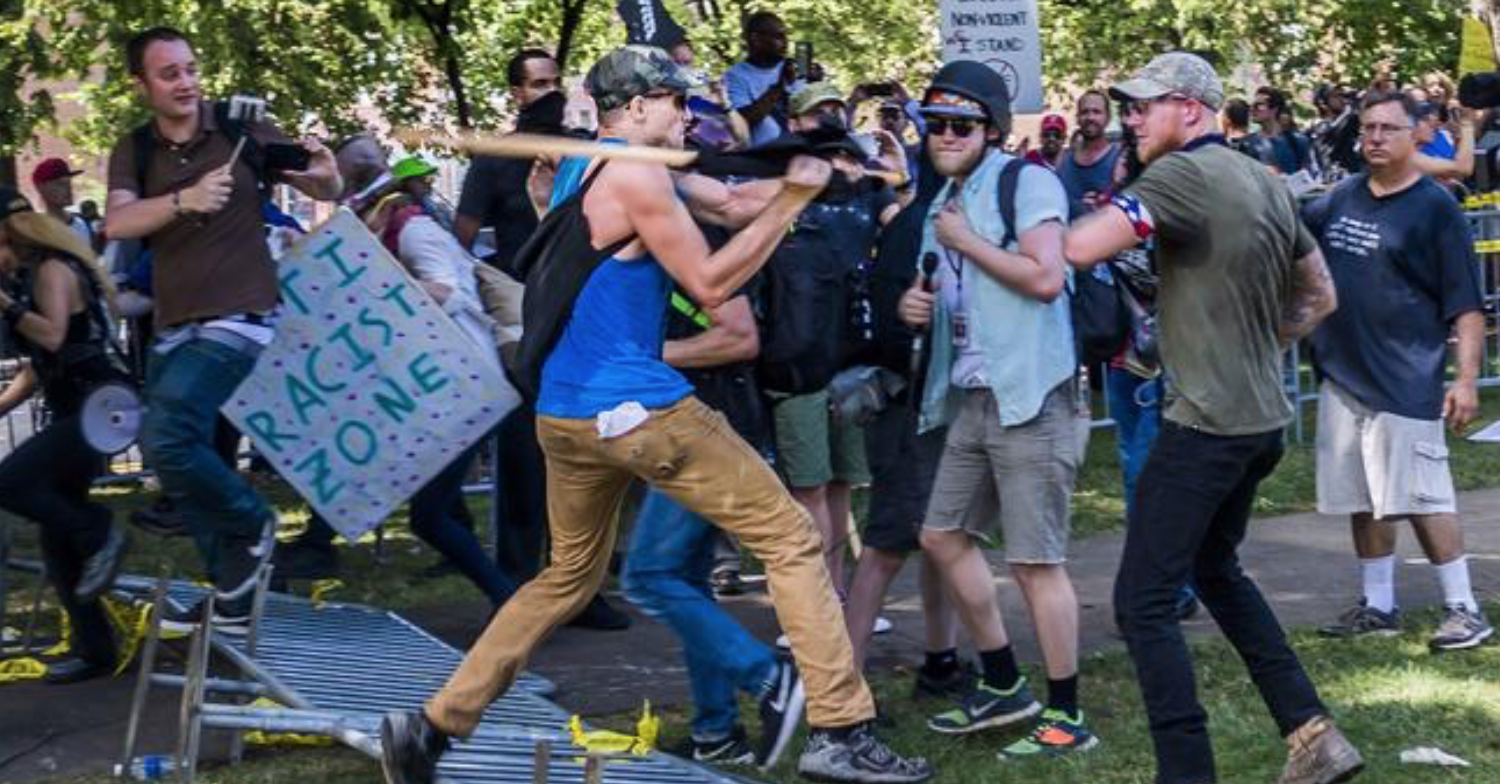 It has been almost three months now since the ugly protest in Charlottesville, Virginia, that ended in many injuries and three lives lost. The news no longer speaks of Charlottesville, but is the problem gone? Should we go on with our lives and forget what happened? Is the hate and racism gone that we saw the weekend of August 12th and 13th, or is it just festering under the surface waiting for the next trigger to send it spewing forth again?

Well, the issue has surfaced again, at least a couple times, since then with the protest in St. Louis over the acquittal of a former police officer (who had shot an African American man in 2011 after a police chase), and most recently with the kneeling during the national anthem phenomenon at the beginning of NFL football games. Unfortunately, in the past couple of years, our country seems to be becoming more and more divided politically, culturally and racially. The anger and the hurt we saw in the 2016 Presidential race, the “Black lives matter” movement of 2016, and this year’s events in Charlottesville and St. Louis are evidence of this discouraging trend. Bloody acts of hate seem to be occurring at increasing frequency with the mass shooting in Las Vegas, an Isis inspired act of terrorism last week in New York City, and just this past Sunday another horrific mass shooting in a Texas church! So much tragedy! So much hurt and pain! So much hate!

So do you remember what happened in Charlottesville? For those who were caught up in the busyness of life and managed to miss most of the details in the news, the gist of it was this: On the weekend of August 12th and 13th 2017, white nationalist, neo-Nazi, and pro-Confederate groups organized a rally in Charlottesville and marched through the grounds of the University of Virginia’s campus in order to protest the removal of a monument to Confederate General Robert E. Lee. Counter protesters were there and sadly angry words turned to violence and fighting between the two groups. As the protest was being broken up because of the violence, one of the white nationalist protesters purposely drove his vehicle into a crowd, killing one, and injuring 19. In the effort to monitor the protests, a police helicopter went down, killing two officers. It was a tragic and sad day for that community and our country. Such needless loss of life! So much energy expended in hate! And so many new wounds and resentments added to the racial and cultural divide in this country.

Yet, we need to ask why this happened. Why do we see so much animosity between people groups after all that has been invested into civil rights reform in this country? After so much legislation and education, shouldn’t we be over racism? And how does the United States end up with a deplorable act of home grown (non-Muslim extremist) terrorism and murder not unlike the ISIS inspired acts seen just a week later in Barcelona, Spain? Well the trouble all boils down to the condition of the human heart.

THE PROBLEM: WE ARE ALL BORN WITH NATURALLY EVIL (SINFUL) HEARTS

While commenting on the events in Charlottesville, former President Barack Obama posted a quote by Nelson Mandela:

This statement echoes our culture’s idea that people are basically good; a philosophy which leaves people surprised and stunned when tragedies occur, like the events in Charlottesville, Las Vegas, and most recently in New York and Texas. So when obvious evil arises from among us, our culture concludes that (as said in a quote from Yale University social psychologist Jennifer Richeson) it ..”is not the product of some deep-seated, evil heart that is cultivated. It comes from the environment, the air all around us.” In other words, if we hold to the idea that people are basically good, then we have to conclude that the hate and evil seen in people across this world must be the result of the environment in which they live or grew up in. It then follows that if you remove the negative environmental pressures of poverty, cultural bias, and lack of education, that men and women will be good (if you don’t put bad in, then the natural good will show through). But does this philosophy really fit with what we saw in Charlottesville, and what we see today in the world around us? Can the evil in this world really be ended by changing the external conditions in which people live?

THE TRUTH ABOUT THE HUMAN HEART

If you read the Bible, you get a completely different description of the human heart. God says in Jeremiah 17:9 that the “heart is deceitful above all things and beyond cure” (that is without divine intervention), and in Genesis 8:21 that “every inclination of (the human heart) is evil from childhood.” Likewise, we find in Romans 3:10-17 another description of the human heart before God’s intervention- “There is no one righteous, not even one; there is no one who understands, no one who seeks God. All have turned away, they have together become worthless; there is no one who does good, not even one. Their throats are open graves; their tongues practice deceit. The poison of vipers is on their lips. Their mouths are full of cursing and bitterness. Their feet are swift to shed blood; ruin and misery mark their ways, and the way of peace they do not know.”

Wow! This does not sound like the human heart is naturally good and loving! And these words are coming from the One who designed the human heart and who has the power to literally see into every human soul! (Hebrews 4:12-13; Psalm 139) The Bible says that the default mode for the human heart is not good, but evil. The only love we are born knowing is love of self, and we naturally hate anything that gets in the way of our selfish desires, (this is the root of the sin of prejudice and racism). You just have to watch little children to see this truth- no one has to teach them to hit each other, to steal each other’s toys, to bully each other, to scream and throw a fit when they don’t get their way.

Even so, these scriptures are hard for us to wrap our heads around. For instance, they say “All have turned away,” “There is no one righteous.” “All” would include you and me in that nasty list! Ouch! Most of us at one point in our lives would say that “I am not that bad, my good deeds far out way the few bad things I do; how could I truly be that bad? And how could it be true that no one does good? I see people doing good things in our world all the time! So doesn’t that disprove that every inclination of our hearts is evil all the time? And why would God make men with evil hearts anyway?”

Well first of all, the Bible tells us that God did not create man with an evil heart. The first chapters of Genesis describe how the human soul was made perfect and in the image of God. Originally there was no evil in the human heart. God’s nature is to love (1 John 4:8) and likewise, Adam and Eve’s hearts were created to love God and to love each other. Unfortunately, it didn’t stay that way very long. In an effort to be like God, Adam and Eve choose to disobey God, and evil entered the human heart. The result was death entering our world (Romans 5:12), and the curse of a rebellious, evil heart (what the Bible calls a “sin nature”) being passed on to every descendant of Adam and Eve. Ever since Adam’s son Cain killed his brother Able, hate has been a hallmark of the human race, and sadly watching the nightly news will provide much evidence for this.

But what about the acts of kindness we see people do all around us? Though evil has penetrated every part of the human soul, we still bear the marks of our creator, having been created in God’s image. You see this in the natural loving compassion that a mother has for her child, or the soldier who jumps on a grenade to save his comrades. Though the hearts of men and women are evil, God regularly intervenes in this world to restrain evil and extend what is called “common grace” to all mankind, touching even the hearts of the unbelieving to cause them to do the good will of God (for example God inspired the pagan King Artaxerxes to help make possible Nehemiah’s rebuilding of God’s temple and the city walls in Jerusalem- Nehemiah2:4-8). Then of course, you have the men and women throughout history whose hearts have been changed by God, and whom He has used powerfully to  change the course of human events (Mosses, King David, George Washington, William Wilberforce, and many, many more). When the Bible says “no one does good” though, it is speaking of the natural man before God has touched his heart.

Fortunately, there is much good in this world, but it doesn’t originate with man; all good originates with God. The problems we see in our country today are heart problems, not problems which are going to be fixed by the superficial measures of removing monuments or kneeing during the national anthem. Yet, there is more to our heart problem and we will discuss that next week.