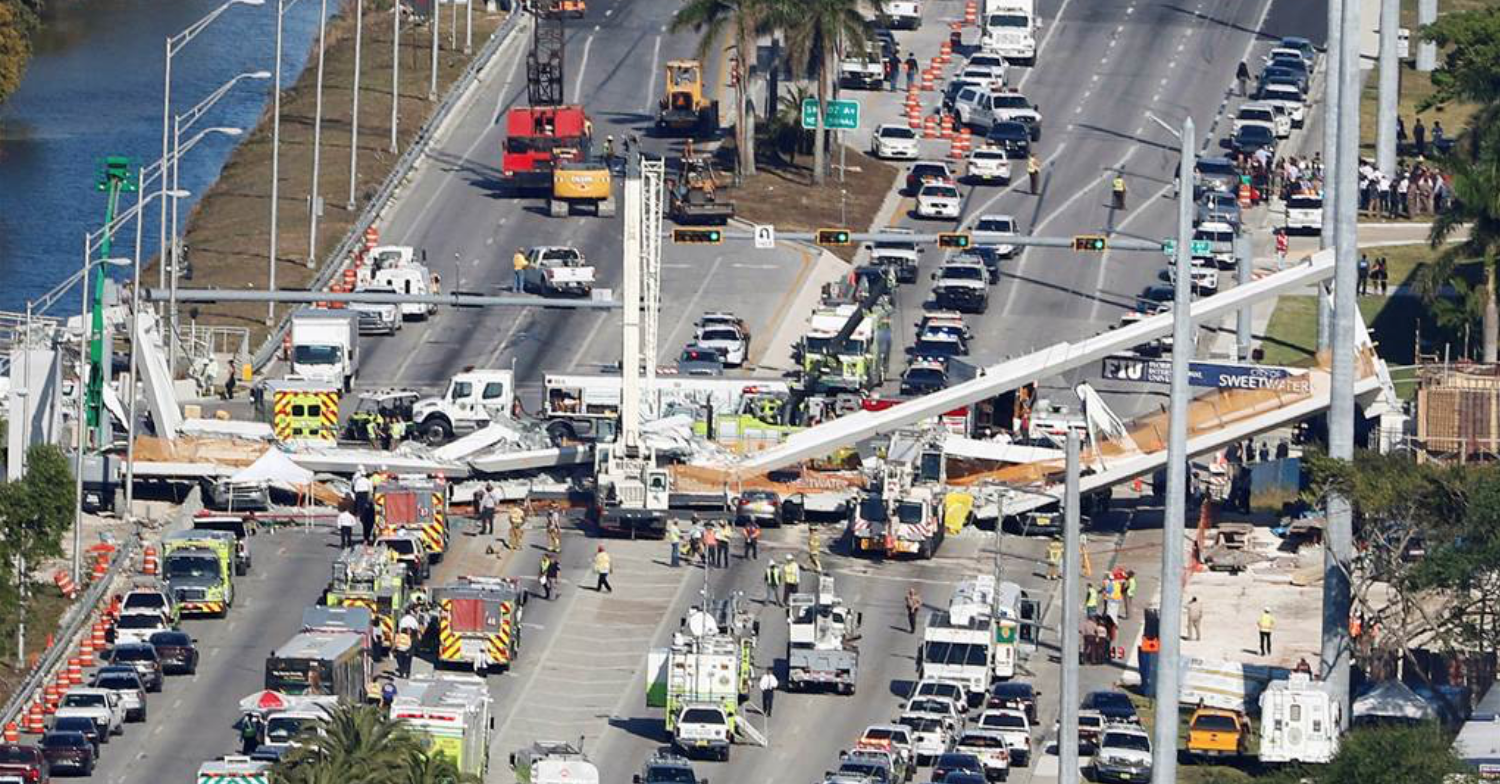 This past Thursday afternoon as I started up my pickup truck, I caught the tail end of a news report stating that a bridge had collapse, people had been trapped, and casualties had occurred. As it turned out, this breaking story was that of the collapse of a pedestrian bridge which had been under construction at the edge of Florida International University's campus, in Miami, Florida. I later heard that six were confirmed dead, and nine taken to the hospital. My immediate response was to pray for all those involved, and then I thought how tragic this is, especially for a state and a nation still mourning the school shooting that happened just last month in Parkland, Florida. It seems like there is just one disaster after another these days. I knew that the big question of “why” would be on everyone’s mind, and that the news would be full of speculation. Then it occurred to me, that the Lord, whom many of us instinctively pray to in times like these, knows exactly what happened. It was not a surprise to Him.

So what would the Lord Jesus Christ say if a reporter came to Him, asked the why question, and then offered Him the microphone? Well, it just so happens that we do have Jesus’s response recorded in the book of Luke, chapter 13. A similar tragedy had happened during the ministry of Jesus on earth. Verse 4 tells us that a tower in a place called Siloam, had fallen, killing 18 people. Jesus’s response is recorded in the context of people reporting to him about another horrific tragedy- that of the Roman ruler Pilate, slaughtering a number of Galilean Jews while they were worshiping and sacrificing in their synagogue or temple. This second tragedy is uncomfortably similar to the recent shooting in a Texas Baptist Church.

So what was Jesus’s response? Did He describe in detail the structural problem with the Tower? Did he identify who was to blame for faulty design, construction, or materials? As God, He knows the exact answers to these questions. He knows every truth about every tragedy that will ever happen, right down to the smallest detail. Yet, Jesus’s answer is surprising- “unless you repent you will all likewise perish.” (Verse 5) This was also the response Jesus gave to the news about the “Galileans whose blood Pilate had mingled with their sacrifices.” (Verses 1-3). Jesus did briefly dismiss the popular notion of that time, that when bad things happened to people it was always punishment for some sin in their life, but again, Jesus focused on a stern warning to repent or you will all perish. (Verse 3)

Why does the Bible not record him strongly condemning Pilate, or giving condolences to the families of the slain? Is Jesus being cold hearted? Certainly not! You see there is something much worse than being shot to death or having a bridge fall on you, and it is out of great compassion that Jesus is sending his warning to us! In Matthew 10:28 Jesus warns us “do not fear those who kill the body, but cannot kill the soul. Rather, fear Him who can destroy both soul and body in hell.”

You see, Jesus was and is, both fully man and fully God. As God, Jesus knows everything and sees everything. He sees the reality of Hell, the immense suffering there (note the story of “The Rich Man and Lazarus”- Luke 16:19-31), and the eternality of the sentence of all who are sent there. Jesus also knows what those in Hell are missing out on- the grandeur of Heaven and the indescribable privilege of knowing God the Father and being loved by Him.

At the same time, Jesus sees the great depravity of sin in every human heart (Romans 3:23), and our complete inability to fix our sin problem and earn our way to heaven. Fortunately, Jesus is full of compassion even for the rebellious sinners who hate Him and wanted to kill Him (Romans 5:8; Luke 13:34-35; 23:34). It is for this very reason, in fact, that Jesus took on human flesh and came to earth in the first place. It was God the Father’s plan that Jesus would die on a cross to serve our death sentence (1 Corinthians 15:3). Jesus knew that upon rising from the dead, all who put their trust in Him (Romans 10:9-10) and repented (repentance is admitting your sin; asking God to forgive you, and turning away from your sin to seek Jesus) would be forgiven all their sins, granted eternal life in Heaven, and adopted as God’s children! This is why Jesus’s response in Luke 13 was REPENT!

So next time you hear something in the news about the bridge collapse, or next time you come across a conversation about gun control, I hope you remember Jesus’s call to repent. Then look to share the good news of Jesus’s death, burial, and resurrection, (The Gospel), with someone today.

In recent weeks our pastor has been teaching through the thirteenth chapter of Luke, and I invite you to listen to his sermons online. There is so much in this chapter of Luke about Jesus, the kingdom of God, and this moment in time in which we have been given opportunity to respond to Jesus’s invitation.