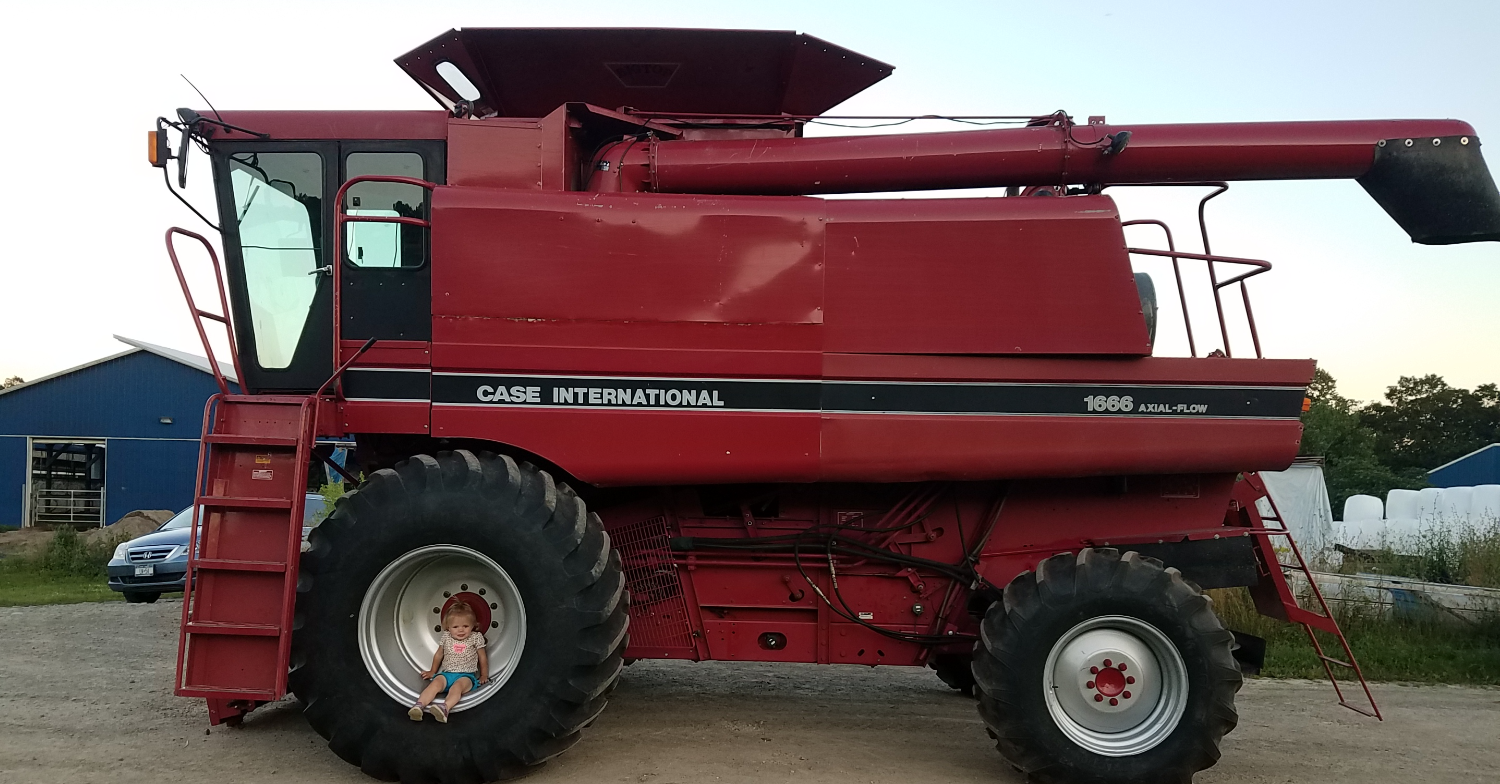 It was a beautifully bright sunny and hot late July morning in 2017. The heavy morning dew had recently evaporated away by the heat of the sun. It was time to resume harvesting wheat, and I had no time to spare. You see, for the past couple of weeks it seemed that just about every time the wheat was dry enough to combine, it rained. The wheat was starting to sprout because of all the rain, and it needed to get out of the field and into a dry bin. As was typical for this season, the forecast for this particular day was chance of showers in the early afternoon, and I still had two other farmers counting on me to harvest their wheat after I finished this job! To top it all off, we were missing our lake side camping reservations in the Adirondack mountains, and my wife and kids were waiting for me to finish combining so that we might be able to salvage at least part of our vacation (on a dryer, “normal” year, wheat harvest would have been finished a couple weeks earlier).

So needless to say I was in a hurry when I started my combine and moved it next to the truck to unload the grain already in the bin from the previous evening’s combining. I moved the unloading auger switch forward and glanced out the cab window expecting to see the giant auger swinging out over the truck, but nothing happened. Thinking that the auger was likely full of grain and extra heavy, I opened up the combine throttle for maximum hydraulic power, but the auger remained motionless. At this point I said to myself “You have got to be kidding! I am not going to get anything done if I can’t even unload the combine bin!” The strange thing was, that the auger had been working perfectly the night before when I stopped for the evening, and the unloading auger had never troubled me before.  I quickly thought to myself, “what could have changed from then until now? Maybe I knocked lose a wire on one of the unloading auger’s limit switches when I was tarping the combine last night?” So I quickly checked the connections and then checked the fuse panel, and all seemed good. I hurried next to start tracing the hydraulic lines from the unloading auger’s hydraulic cylinder looking for an oil leak. About then I knocked my head on the combine for the second time that morning and I was upset! (livid) I continued my search and found nothing, and so returned to the cab.

At this point I was beginning to fear that there was a bad wire or electrical connection somewhere between the switch and the electrical harness under the cab; all of which are hard to get to. The combine electrical harness is a maze of wires which I like to stay out of, and mice like to get into. I was starting to think that my giant combine had been immobilized by a tiny mouse chewing through wires searching for grain. In contemplating this fear, I thought of calling my friend Tom- a seasoned combine mechanic and fellow custom combine operator who has helped me out of binds over the phone many a time. But before I reached for my phone, the thought occurred to me “I haven’t asked God for help yet.”

In my hurry and frustration I had forgot to ask the One who knew exactly what was wrong and who has the power to fix anything. So I prayed to God, asking for direction and help. Then I glanced back at the switch, and started to consider how I could get it apart to check to see if electrical power was getting to it. As I was doing this I noticed that the toggle switch which directs hydraulic cylinders to lift the reel (the big spinning part of the grain head that pushes grain into the combine) was stuck in the on position; I must have bumped it the previous evening. I returned the switch to the off position and immediately the unloading auger started moving.

That was all it was! A simple switch stuck in the on position drained hydraulic power. Was it coincidence that I didn’t find it until after I prayed? I don’t think so! God wants us to come to Him first when we are in need, not to put our hope or trust (our faith) in our own abilities, our possessions, or in the help of another person. It is in the midst of difficulties that we come to see who we are really trusting.

My experience brought to mind the story of king Asa from the Old Testament book of 2 Chronicles. He was the king of Judah and was faced with a much bigger problem than a malfunctioning combine- the giant Cushite army was marching toward him and the army of Judah was way out numbered. Asa’s first response was to call to the Lord for help- “Then Asa called to the Lord his God and said, ‘Lord, there is no one like you to help the powerless against the mighty. Help us, O Lord our God, for we rely on you…’” (2 Chronicles 14:11). God answered his prayer with a mighty victory followed by many years of peace. Unfortunately, though, as Asa’s wealth and prosperity increased his trust began to move away from God to his possessions. For when the neighboring nation of Israel (much smaller than the Cushite army) invaded Judah a couple of decades after Judah’s great victory over the Cushites, king Asa’s first reaction was not to seek the Lord’s help, but to pay the nation of Aram to attack Israel (2 Chronicles 16). This solution at first seemed to work, but ultimately angered the Lord and brought serious consequences (the nation of Aram eventually invaded and conquered Judah).

So what problem or difficulty are you facing? Was your first response to ask the Lord for help? Have you trusted God in the past, but now are starting to relying more on your ability or resources? I know from experience that it is much more important to God that I learn to fully trust Him, than for my combine to work or for the wheat to get harvested. He may well use the means of a resource like a tool or the ability that he has given me to fix things, or the help of another person, but each of those modalities has a limit- there is always going to be a problem that our help and resources can’t fix, and a problem that will exhaust the best human knowledge. But God knows all things. He always knows exactly what the real problem is. God is all powerful (He spoke the universe into existence) and He never runs out of resources or the ability to fix. Best of all, God is full of mercy and love for us, and desires to help us!

I would like to conclude with the rest of my combining story; for that hot July day God not only directed me to find the switch that was stuck on in the combine, but he directed the weather as well. For just as I finished the wheat at the first farm, the sky poured down rain. Yet, when I moved the combine three miles down the road to the next farm, it had not rained a bit and I was able to finish that job by night fall! God had answered my prayers in a big way!

2 Chronicles 14:11 Then Asa called to the Lord his God and said, “Lord, there is no one like you to help the powerless against the mighty. Help us, O Lord our God, for we rely on you, and in your name we have come against this vast army…

2 Chronicles 15:2 …The Lord is with you when you are with him. If you seek him, he will be found by you, but if you forsake him, he will forsake you.

2 Chronicles 16:2 Asa then took the silver and gold out of the treasuries of the Lord’s temple and of his own palace and sent it to Ben-Hadad king of Aram…

Vs. 7-9 …”Because you relied on the King of Aram and not on the Lord your God, the army of the king of Aram has escaped from your hand. Were not the Cushites and Libyans a might army with great numbers of chariots and horsemen? Yet when you relied on the Lord, he delivered them into your hand. For the eyes of the Lord range throughout the earth to strengthen those whose hearts are fully committed to him.You have done a foolish thing, and from now on you will be at war.