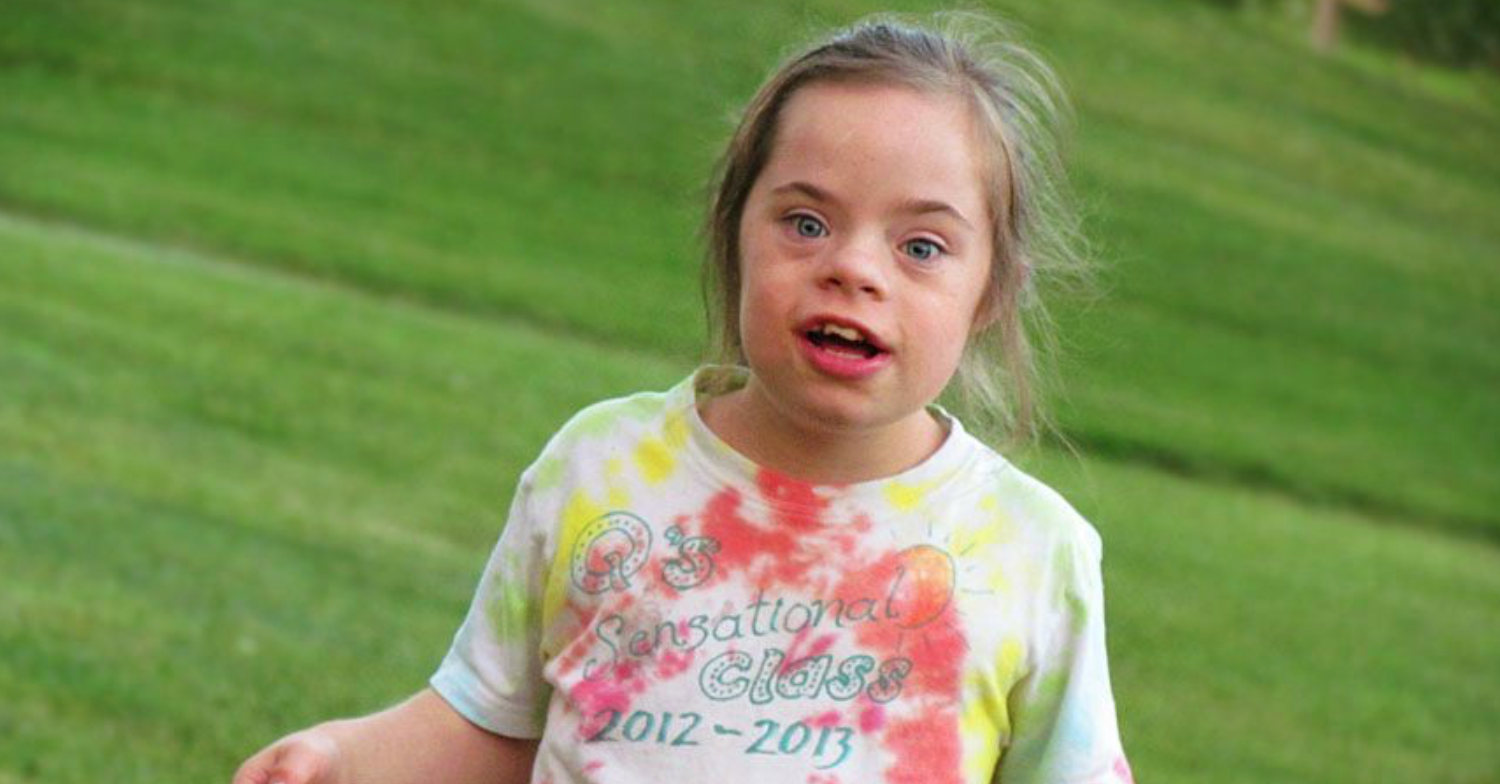 I don’t think anyone really thinks that someday they will have a child with special needs.  You see other families with children that have various disabilities; you feel for them, and thank God that you have healthy kids. That was my thinking 9 years ago.

Having extra chromosomes changes the way the brain and body develop so there are numerous health issues that go along with DS. A child born with DS can have congenital heart defects (which our daughter was diagnosed with), high risks of cancer, thyroid problems, gastrointestinal complications, visual and hearing impairments and many other issues. Our daughter also has many developmental delays, such as physical abilities, communication, and eating issues.

When I gave birth to Madalyn, (aka Maddie), I thought I was giving birth to a healthy, baby girl. She came into my arms with a full head of dark hair and looked just like her older brother and sister.   After my husband and I spent some time with her, the nurse took her away to be examined by the pedestrian, which is routine. About an hour later, my obstetrician, the pediatrician and a few other doctors came into my room to speak to my husband and I.  The details of that morning were very fuzzy as I was still coming off anesthesia from having a C-section, but the news we were about to receive was shocking none the less.  The group of doctors surrounded my bedside and gave us the news that they were pretty certain our little Maddie had Down Syndrome. They told us that she had all the same characteristics as a child with DS, but a genetic test was being ordered to be sure.  I never really freaked out or cried, but just said “OK, thank you,” to the doctor and closed my eyes. I had a ton of different emotions swirling through my head, mostly fear, uncertainty and numbness.  I was a fairly new Christian at this point in my life, so I did not have a good understanding of God’s Sovereignty, so I told myself that day that Maddie’s diagnosis was a genetic “mistake” and that God had nothing to do with this.

I was in the hospital 5 days recovering and also staying with Maddie, who was placed in the NICU for observation. She was diagnosed with a heart defect very soon after birth and the cardiologist wanted to have her stay a few extra days. In the meantime, our previous pastor gave me a copy of R.C. Sproul’s book “The Invisible Hand,” to read during my hospital stay. The book was loaded with rich Scriptures and writings on the providence of God and the question “Do all things really work for good?”  This book started me on a journey towards growing to understand and love dearly the doctrine of God’s sovereignty and that He is always in control, even in disabilities.

During the years of having Maddie, our family went to many doctor appointments, experienced open heart surgery on our newborn baby, other hospitalizations, and lots of different therapy. What helped me get through these trials were the truths of God’s omniscient and omnipresence found in Psalm 139.   Maddie’s extra chromosome was formed and her heart defect was knitted together in my womb. Her small frame was not hidden from the Lord, when she was made in secret.  We praise You for Maddie is fearfully and wonderfully made to have slow speech. Maddie’s weak eyes and stomach complications were intricately woven in the depths of the earth. God’s eyes saw Maddie’s physical inabilities and flat feet.  In His book were written, every one of them in days that were formed for Maddie with Down Syndrome, when as yet there was none of them. (HT: John Knight at Desiring God blog “Is God Sovereign Over Human Disability?”)

What a blessing our little girl has been to our family over the past 9 years!  I now believe wholeheartedly that for those who love God ALL things work together for good.  Day by day the hard trials of having a child with special needs has conformed my husband and I in ways we would have never imagined. My old thoughts of Maddie being a genetic “mistake” were very wrong indeed, but God in His goodness has shown me that He is the One responsible for giving our family a child with disabilities. Our great God made our special needs child and fashioned her in the womb (Job 31:15) and the reason, right from the words of Christ Himself, “that the works of God might be displayed in Madalyn.” (John 9:3, emphasis added).