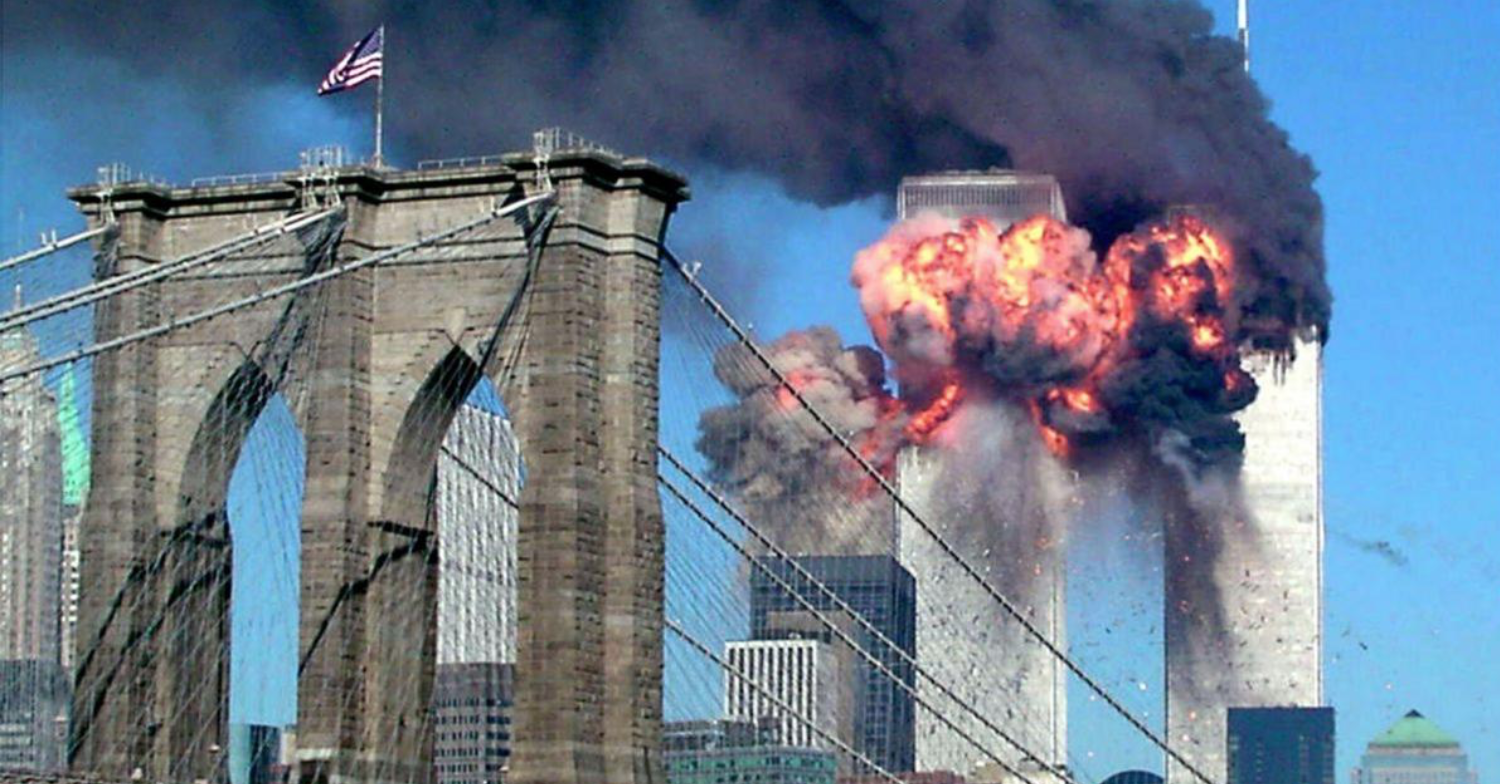 Seventeen years ago, on a picture perfect September morning, four planes took off into the beautiful blue morning sky never to return to an airport again. Nineteen men aboard these planes were set on a suicide mission to use these jets, full of passengers, as weapons of mass destruction against innocent civilians. Three planes hit their mark, one into each tower of the World Trade Center in Manhattan, NY, completely destroying the towers, and one into the Pentagon in Washington D.C. The fourth plane crashed into the Western Pennsylvania countryside. Almost 3000 people lost their lives that fateful day in September, in one of the most egregious acts of aggression our country has ever seen. It seemed as if we all suffered loss that infamous day, if not the loss of a friend or loved one, then the loss of naivety and a sense of security. Though terrorism was nothing new around the world, that day it became real to those of us who call the United States home. Shortly thereafter, a new phase arose in our nation’s vocabulary- “The War on Terror;” a war that has continued for seventeen years and still seems to have no end in sight.

Yet, what was behind the events of September 11th, 2001, and behind all the acts of terrorism that we have seen since? Who or what are we really fighting in “The War on Terror?” Well, when thinking about the September 11thattacks, the source of terrorism that quickly comes to mind is Muslim extremists. The men who hijacked those planes believed that they were serving their god by fighting a jihad (holy war) against the United States. Since the September 11thattacks we have seen a wave of violence from Muslim extremist groups, like al-Qaeda and then ISIS, that seemed to spread throughout the Middle East and even into terrorist cells planted amongst Muslim sympathizers within the countries of the west. Yet, is there something behind even these Muslim extremist groups? Is there a deeper source of evil that is not specific to these groups, but rather permeates throughout our world?

I ask this because we seem to be living in a world of ever increasing violence, and much of it is not related to Muslim extremist groups at all. Just look at the Las Vegas concert shooting that occurred October 1st, 2017; or when the white nationalist drove a car into a crowd of people in Charlottesville, Virginia in August of 2017; or the tragic run of school shootings we have seen recently. Then beyond the physical acts of violence, there are so many words of hatred torpedoed between political, racial, and special interest groups today.

Could all this evil be related? Is there some secret evil agenda that we don’t know about? And if there is some conspiracy of evil, where would we even go to find the truth? In today’s world it is sometimes hard to know who the good guys actually are, and we can start to wonder if there actually is someone out there who is truly good- who doesn’t have a past, a secret agenda, or skeletons in the closet; who we can always count on to bring justice, count on to seek our best interest, and someone who actually has the power to do something about the condition of our world. The great news is that there is someone who is always good, who is in control, who has all the answers, and who truly loves us!

If you have read the Grace Notes blog before, I’m sure that you know that it is God of whom I speak. Not Allah, not Buddha, but the God of the Bible and His Son Jesus Christ. God’s Words written in the Bible give us the full truth. And yes, there is a secret agenda, a great deception put forth by the powers of evil that reign in this world to disguise “the real war” behind all wars. Ephesians 6:12 states that “our struggle is not against flesh and blood, but against the rulers, against the authorities, against the powers of this dark world and against the spiritual forces of evil in the heavenly realms.” Likewise, 2 Corinthians 4:4 says that “…the god of this world (the devil) has blinded the minds of the unbelievers, to keep them from seeing the light of the gospel of the glory of Christ, who is the image of God.” The real war is for the hearts of men and women- Satan does not want to see men and women being reconciling with God.

This war started way back at the beginning of creation. Genesis 3 describes how Satan, disguised as a serpent, persuaded the first man and women through means of half-truths and lies to disobey God in order to be like God (Genesis 3:5). That act of disobedience joined mankind with Satan and his demons in a cosmic rebellion against God. Not only did that act of disobedience destroy the close relationship Adam and Eve had with God, but it brought the curse death and the curse of a sin nature to all of mankind. Because of this curse, every one of us is born with a selfish, sinful heart, and we are born blind to both the evil in our heart and blind to the God who loves us. Even more than that, without God’s intervention, each one of us is destined for an eternity of punishment separated from God. (For more detail see my blog posts “Why so much Division and Hatred in our Country?” and “Born Blind”)

The amazing thing about God is that in his Grace he did not choose to outright crush the human rebellion (which is within His power, right and duty), but rather throughout the generations, God has continually approached mankind with great patience and grace offering the opportunity to men and women to repent (admit wrong and ask for forgiveness) and be reconciled to Him. Like the first responders on September 11th who willingly sacrificed their lives to climb the burning towers in order to save the lives of others, God himself came to earth in the form of the man, Jesus Christ, to sacrificially die on a cross to pay the punishment for the sin and rebellion of every person who repents and trusts in him. (See my blog post “The Only Lasting Solution” for more on this amazing rescue) God is literally taking his enemies, winning their hearts over with his love, and through the power of Christ’s sacrificial death transforming them into his loving children!

So what should we do as we pause on this September 11th to again remember those that died that tragic day in 2001? First, we need to pray! Pray for the families who still mourn the loss of their loved ones (for those who lost loved ones both on September 11th and also during the war on terror that has followed). Pray that those who have suffered loss will find comfort in Christ, for He cares more than they can ever imagine! (He is the God of all comfort- 2 Corinthians 1:3-4). Pray also for perpetrators of these evils deeds. Though they are fully accountable for their actions, even Osama bin Laden and the terrorists who hijacked those planes on September 11thwere just pawns in the hands of Satan (Ephesians 2:1-3; 2 Timothy 2:26). God loved them enough to die for them as well, and had they repented before they died and trusted in Christ, they too could have been forgiven and made to be Children of God (that shows just how great the love, forgiveness, and saving power is of God through Christ!). God has been moving in a great way amongst those of the Muslim faith, and Muslims have been coming to know Christ as their savior in large numbers! (Break Point 11-4-2016 commentary) Pray that God’s Spirit continues to work in the hearts of Muslim people groups around the world! Pray for our own hearts, to be able to forgive, as the Lord forgives us, all those who have done evil to us and our loved ones (this is an impossible task without the power of Christ’s forgiveness- see more on this in “The Only Lasting Solution”). Pray that God opens our eyes to His truth and opens our eyes to the deceptions of the evil powers of this world, that we may not be used by these evil powers in their quest to keep people from knowing the Lord.

Second, we need to get the truth about the human condition, the truth about God, and the truth of the Gospel (good news) of Jesus Christ out to the dying world around us. Most of our culture does not even believe that God, Satan, heaven, or hell exists (and that is the way the powers of evil want it!). Those who do recognize a higher power often find themselves greatly deceived as to how to reach God. The Bible is clear that there is only one way to be made right with God and escape His coming wrath, and that is through knowing Jesus (not by earning God’s favor with good works). For in John 14:6 Jesus said “I am the way, and the truth, and the life. No one comes to the Father except through me.” How shocking and horrific it must have been for the hijacking terrorists upon hitting the World trade center to immediately find out that Jesus, not Allah, is Lord of the Universe, and that they were on the wrong side of eternity! That blazing inferno of jet fuel still burns around those terrorists, never to be quenched in all of eternity. God does not take joy in their punishment (Ezekiel 18:23) and neither should we. The fact is though, that the Bible makes it clear that Hell is real! (Luke 16:19-31; Revelation 21:8; Matthew 25:41) And it is not just for terrorists or mass murderers- it is for anyone who does not repent and acknowledge Jesus as Lord. Like the burning towers, the fires of Hell rage and we like the first responders of September 11thneed to be pointing everyone we can to the only path to safety, and that is in the Gospel of Jesus Christ!