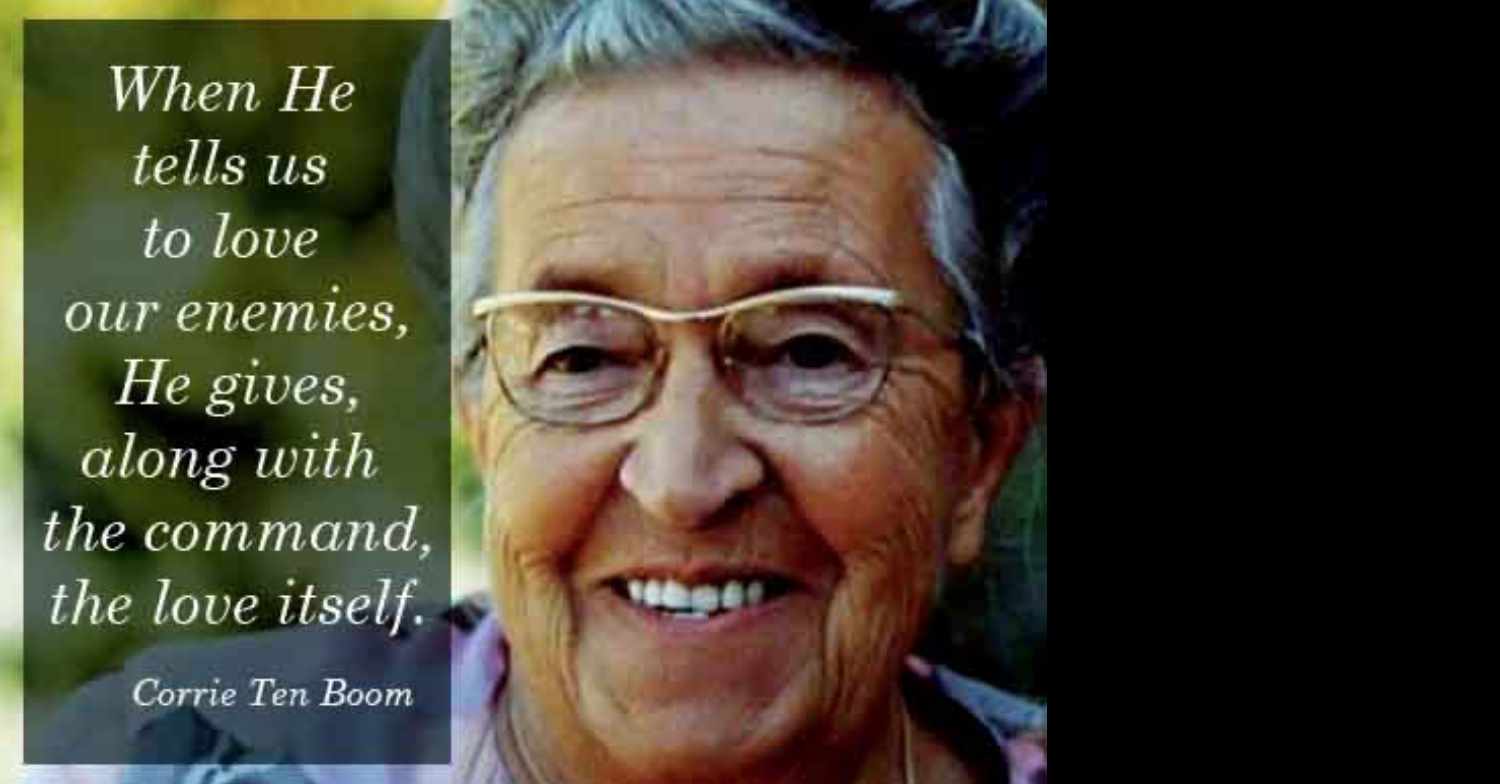 Why is there such racial and cultural division in our country today? Why do we see so much hate and bloodshed within the United States? If you go online or turn on the TV, you will find many who claim to have the answers. Yet, very few of the explanations include the evil which is in the human heart. The Bible clearly states that every person is born with an evil (sinful) heart (Genesis 8:21, Jeremiah 17:9); and it is from the evil hearts of men and women that all division, hate, and murder flow. Unfortunately, we are also born blind to the true condition of our hearts, blind to the fact that we are enslaved to our desires and passions, and blind to the fact that we are being played like pawns by the spiritual powers of evil in this world. We are deceived to the fact that ultimately we are part of a rebellion, fighting against God, and that our treasonous actions have earned every one of us an eternity in a place called Hell!

The solution to hate, division, racism, and evil in the human heart is found in the grace and forgiveness of Jesus Christ through his payment for our sins on the cross, and the lasting heart change his love makes in the hearts of all those who believe and trust in Christ!

You see God is not just perfect in righteousness and justice, as I have talked about in previous posts, but he is at the same time infinitely loving and good! The justice of his nature cannot let even one sin in the breath of all of eternity go unpunished, but at the same time his loving nature desires reconciliation with us and does not want to see us suffer eternally in Hell (2 Peter 3:9), even though that is what we deserve. So in the greatest act of love in all of history, God, in the form of Jesus Christ, stepped into human time and existence, and took the punishment for our sins on the cross! Romans 5:7-8 says that “Very rarely will anyone die for a righteous man, though for a good man someone might possibly dare to die. But God demonstrates his own love for us in this: While we were still sinners, Christ died for us.” The power of Christ’s forgiveness and the depths of his love for us was demonstrated in that while we still hated God and were offending Christ, while we were still his enemies fighting against him, he loved us! He loved us so much that he not only forgave us, but he willingly served our death sentence for us, for the treasonous sins we were committing against him!

Though we are born hopelessly bind to Him, God himself graciously opens our eyes to the truth of the great love shown us on the cross. When we admit our sins, and humbly seek Him, God transforms us from hateful enemy to loving family through the awesome power of God’s forgiveness and grace! And this is possible because Jesus does not just forgive us, but he actually changes the nature of our hearts so that we can now truly love. In Ezekiel 36:26-27 God says that “I will give you a new heart, and a new spirit I will put within you. And I will remove the heart of stone from your flesh and give you a heart of flesh. And I will put my Spirit within you, and cause you to walk in my statutes and be careful to obey my rules.”

Part of God’s Spirit actually comes to live in your soul! The Spirit of God, (most often using the words of the Bible,) begins to communicate to the believer what God is like. A personal relationship including two-way communication between God and humanity is birthed. This relationship breaks the power of the desires found in our old nature. We are no longer slaves to our passions, but are free to truly pursue “good” (Romans 6:17-22). The evil spiritual powers of this world shudder at the presence of the Spirit of God who now resides in us, and relinquish any control they had on us! (John 17:15) We no longer feel the weight of guilt, but rather the joy of experientially knowing that God loves us and now sees us as righteous!  (John 17:20-23; Corinthians 5:21) And God’s Spirit enables believers to “love [their] enemies and pray for those who persecute [them]” (Matthew 5:44). God enables men and women to love and forgive others as he loved and forgave us on the cross. This is the true solution to hate and division. When the power of Christ’s love and forgiveness heals the bitterly wounded, and changes the hateful perpetrator’s heart to a loving one, people are not only reconciled, but united as brothers and sisters in Christ!

THE EXAMPLE OF CORRIE TEN BOOM

I would like to finish with a real life example of Christ’s heart changing work amidst one of the most horrific examples of racism seen in our world, which was Nazi Germany. A Dutch clock maker named Corrie ten Boom, her father, and her sister Betsie started hiding Jews in their home in an effort to save them from the concentration camps, after Germany invaded their homeland. Eventually, Corrie’s family was betrayed to the Nazis by a man Corrie was trying to help. Corrie’s father died not long after imprisonment. Corrie and her sister Betsie were sent to the horrid Ravensbrück concentration camp, where they both suffered tremendously. Betsie died in that camp just twelve days before Corrie’s release.

Years later Corrie came face to face with one of the former Nazi prison guards from that camp, a man who had horribly mistreated Corrie and Betsie. God had changed the heart of this formerly wicked man, and he now was a believer in Christ! This former prison guard knew that he needed to apologize and ask for Corrie’s forgiveness. Was she able to forgive him? Not in her own power. Corrie struggled because the pain in her heart was so great. But Corrie knew Jesus. She knew how Jesus, fully God, chose to give up the glory, honor, and comfort of heaven, and come to earth as a humble servant for our salvation. Corrie knew that though Christ lived a life of humble service and compassion, healing many and teaching about the Good news of God’s Grace and Forgiveness, the majority of his own people, the Jews, hated him and they crucified Jesus! Despite the many miracles of Jesus’s earthly ministry, the people had the same problem that people have today- their hearts were evil, and they were blind to the truth about their own hearts and the truth about who Jesus was.

But God knew all along this would happen, and Jesus’s purpose was to willingly go to the cross to die to pay for the sins of the very people who were shouting “crucify him!” Though Christ was betrayed by a close friend, falsely accused, denied a fair trial, beaten and tortured to death in one of the cruelest forms of execution ever devised by man, he still prayed on behalf of his executioners “Father forgive them, for they know not what they do” (Luke 23:34) while he hung on the cross! What amazing forgiveness and love shown by God to his little, cruel, evil creatures, deserving only of his wrath! Yet, mercy and grace is what he showed them. For in that act he not only spared many of those involved in this execution from Hell, but he made a way for complete reconciliation between them and the God head. Through Christ’s sacrifice, they went from cruel enemies, to brothers and sisters of Christ and sons and daughters of God the Father! (Ephesians 1:5)
When seen with opened eyes, the sacrificial love and forgiveness of Jesus Christ melts the hardest hateful heart. Then with the power that raised Christ’s pulverized body to life in brilliant glory, blowing the boulder away from the tomb door, God gives new life and the power to truly love, to what used to be a hard resentful heart. Corrie knew that Jesus willingly suffered all that, not just for the people of his time, but also for her.

As she prayed for help to forgive her former prison guard, Corrie began to see Christ, to feel his love, and in turn to love her former enemy.  You see the gospel of Jesus Christ changed both Corrie and the Ravensbrück prison guard’s hearts to such an extent that not only could forgiveness happen, but that they could be united as brother and sister in Christ. And this is the power that we need to change hearts in our country today. For the forgiveness and love of Jesus Christ can take the most prejudice and hate full man and change him into a loving brother who is willing to serve alongside and die for those he formerly killed. (Just look at the life of the apostle Paul in the book of Acts; Christian killer turned evangelist!)

You see, the answer we all have been looking for is found in Jesus Christ! Seek him and rejoice in him this Christmas season! In my next blog post I will explore how God choses to use his people (believers in Christ) in bringing heart change to the world.
-TO BE CONTINUED-
Tweet